Content Warnings:
Flashing & shaking
Some adult-only furry images (only if you opt in!)
(....more detailed CW's at bottom of page)

Download the game for the most stable and lovely experience, and gamepad support.

Nice Spice is a JRPG style game with randomized action battles. It takes place in a surreal-horror universe, filled with guts-caves and mystical spice temples. There's hallucination-monsters that you can risk your life to destroy for XP, as well as friendly pals in quaint towns that you can build relationships with.

- - = = About the showcase = = - -
The showcase/demo features a unique town and dungeon that will not appear in the main game (so don't worry about spoilers). The game is still very much a WIP so there's lots of details that will be updated.

Check out the steam page for a trailer (kinda outdated now tbh) and a more in-depth description of the full game.
The best way to understand what this game is... to just play this demo, so please enjoy! If you like what you play then please click the links above and subscribe/follow/etc and tell your pals and enemies about us! It'll really help us out!

Downloadable version is windows only for now.

This is so aesthetic and insane.

Want to see and hear more. Definitely will wait for more.

glad you're digging it!!!

Very impressive demo. Character designs are nice, backgrounds have enough detail to lose yourself in, and I personally love the lil trail affects as you explore the dungeon. Looking forward to the release!

thanks so much! kind words like that really help us :)

You coded this game yourself? Using HTML5? O.O Im jelous and impressed!

thank you a bunch! :3 we actually made this in Stencyl, which exports to multiple platforms including html5 for browsers.

thanks! we're working on it ;3

The fights in dungeon mode are quite fun, looking forward to the full release!

I had fun in the dungeon although the game crashed, also I only found one lewd scene.

Glad you had fun, until it crashed oh no! I wonder what the cause was.

It might have been a random glitch, I played it again today and it worked fine.

Yeah, I'll be interested to see the full version someday.

i really enjoyed this cant wait for full release

First off, I want to say I really enjoy the blend of dungeon-crawling RPG with bullet hell platformer for the encounters. It's cool and unique. I like the bright colors and generally I find the aesthetics for the geometric coins and encounter exits to be charming.

I know this a demo and not reflective of how the full game is going to be, but it needs saying the jump sound effect is not good, and the battle music is far louder than what is expected from changing music volume from the menu. This latter point in combination with not being able to access the settings from within the dungeon gets hard on the ears.

The hit feedback for enemies with higher health than OHKO is difficult to see with the bullet hell nature of the player attacks (other than the enemies who experience knock-back). The shield also has no hit feedback and thus I assumed you were supposed to walk into the shield and just tank the enemy attack.

The Sonic Beam and Void Laser are hard to aim, but the Energy Helix just feels like you're cheesing it and unsatisfying to play once the novelty of being OP wears off. It's also sad you can't break vases with the Energy Helix :(

I'm also concerned with how the NSFW elements are going to be incorporated, because I think I'd enjoy them better if they felt cohesive with the core experience. Right now, they feel pretty tacked on and isolated in their implications.

All in all, I am intrigued by this game and wish you the best on developing it further! :)

Btw, think you could put Patchouli Knowledge in it? :3

This is a lot of feedback! Thanks for the well wishes ^w^

Everything's subject to change but we feel confident we'll get things ironed out in a way we're happy with! And no there won't be characters from other games.

Awesome! The Patchouli thing was a joke :)

I'm a big fan of Sparkles & Gems, so I've been really excited for Nice Spice! I'm like.. the opposite of a fan of bullet hell type games, but still had a lot of fun. Your world-building, atmosphere, and characters absolutely live up to my expectations and I know the demo is just a little sample!

The controls felt great, super responsive (it is a little more slippery than what I'm used to, but also I don't play games of this style so it might be standard haha), animations looked amazing. I'm excited to see increased enemy variety, and I hope there's more strategy involved in the full game. Will there be difficulty settings?

Also I'm curious about the lewd content.. is there any that leans more towards wlw/sapphic?? (this isn't a deciding factor for purchase, just would make me more likely to play w DLC)

glad you enjoy our games so much!! <3 thanks for all the input!

My god, this is probably one of my favorite demos I've ever played. I cannot wait to get my hands on the full game!

Aww thanks so much, glad you liked it :)

Very fond of the looks and play. Helix is pretty dumb powerful, but I imagine a lot of this might get altered a bit? I love the health bar, and background designs are quite lovely.

yeah a lot of the game will change for the final build for sure!

i love the platformer part

style cool. fun.  having up key as a jump would also help

I want to understand the block and shield of the enemy system! I'm guessing the higher your defense the more blocks you can do before taking damage? As for the enemy with shields, are there any ways to indicate how much shield they have or do I just spam the attack until they die lol

Great game! Had a blast and the art is very very good 👍

Yeah the higher your defense the more blocks you can do! We might add something here and there but basically just hit the enemies until they die.

This was honestly super fun! Look forward to playing more.

Also does this come with a steam key on release?

Thanks so much! Yeah, we're planning that if you buy the game on itch it will come with a steam key so you could download it on steam as well.

That's awesome to hear and no prob at all!

I love this. I cant wait to see how far this goes! The style and feeling of this game/showcase is so cool!

Wow, thanks so much for saying that! :)

the demo is amazing!! i love the fighting mechanics, it feels so fun to play this!

aaah thank youuu :3 it's been a lot of work to get it to this point!

that was so satisfying!

this felt absolutely fucking insane and i think i love it

ahhh thank you! absolutely fucking insane is a descriptor that makes me happy to hear x3 haha

cool demo, I would definitely be interested in the full release. A few things: the dungeon feels sluggish to go through, it certainly seems like it would get boring to repeatedly do. The encounters also felt kind of sluggish and boring, I eventually just started running past the enemies as I had little incentive to fight them, and the reward for defeating them can be found in abundance and there is no clear reason to want to have money (at least as of yet, I understand there would likely be some in the full release), so I think the enemies should be made more difficult and engaging and/or have more interesting rewards for defeating. The music and sound design is really good, and I do not think need any improving. The detailed visuals are good, and the sprites are about as good as you can expect the extremely low res graphics to be. I will be excited to try further demos/betas and the full release.

thanks for the feedback! the full game will definitely have more enemy variety and balance, as well as ways to increase stats and use coins that you collect. this showcase is just a very small taste of whats to come :) we are going to be releasing small playable stuff on our patreon if you're interested in playing more until the full release.

There will also be themes of sexuality/queerness in the story. The main game will be "twitch friendly" and the optional day 1 free dlc will contain the lewd and explicit stuff. There will be a lot of it, haha!

Awesome game it kind of reminds me of mega man

thank you! yeah, I (resni is typing this) have a huge soft spot for megaman so I guess it came out lol

sounds about right, weird game by weird people haha! thanks!

This game is so sick! It's got sick bops, killer drops, and like, wicked art.

Judging from this Demo, this game is incredibly unique, everything I'm looking for in a game really. Really looking forward to the release of this gem.

thank you so much!! :3 yeah it's a really unique game haha, not necessarily by design but I guess because we're weird! there's a lot going on in it so it makes me happy when the different parts of it are able to resonate at once with someone!

yesssssss < 3 ready for a queer as hell rpg

yeahhhhh for suuuuure, spread some queerness to the world!!! >:3

I feel that way looking at this game, the spritework, the controls, and the coding are all top notch. The music is good, this game has everything needed to be a classic.

This demo was a blast! The world seems to have like a grit to it that's really unique. The combat is super fun and fluid feeling, the weapons are all different and fun to play around with. Really excited for the full release!! 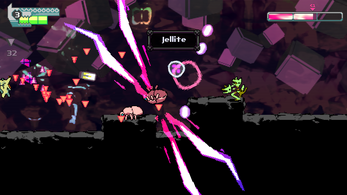 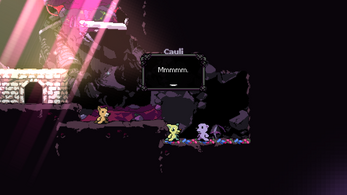 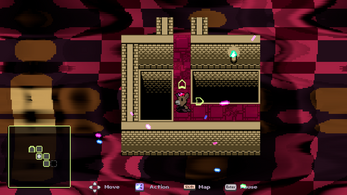